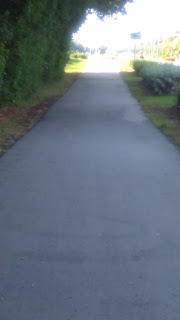 I have taken up morning walks. I love them because it is still relatively cool out, and it is time that has remained largely unclaimed. It is unbelievable how just less than a year ago, my mornings were filled with school schedules and early appointments, and now, I have long stretches of time during the day to do whatever I desire.

Along this walking path, running almost the length of the island, are large wooded areas. Despite walking right along US1, I found my mind wandering into the whimsical realm.

Suddenly, tiny blossoms became fairies. Large spiders nestled in their colossal webs became sentinels for the forest gateways. A hawk transformed into my spirit guide. My morning exercise was a grand adventure filled with wonder and enjoyment. I fancied the breeze through the leaves were the whispers of the trees, judging me as I passed. I could almost discern woodland folk peeking out at me. I almost decided I was going to enter one of the gateways, when I smelled a foul odor. It was almost as if the forest sensed my decision, and warned me away.


Morning walks are now my favorite time of the day. I pass others jogging or biking, and we nod amiably at one another. It is like we are some secret club. I find myself wondering if they, too, sense the energy of the woods beside us.

For many years, I have mildly envied the wealthy lifestyles of the people I consort with. I imagine what life would be like were I never concerned about paying a bill or having enough money for groceries. I see the perfectly manicured landscaping, and the trees that have been shaped into unnatural designs for the approval of the landowners. I see these efforts as a vain attempt to control that which is uncontrollable. Nature is untamed, uncontrollable, immortal. Efforts to thwart her are met with devastation in the forms of storms, hurricanes, tornadoes, and earthquakes.

Such were the thoughts that filter through my mind as I wander my path. I have found complete peace and joy in shedding many of the material things I had collected over the years. I relish the freedom in a more gypsy-like existence. I work to live, not live to work. I consider reopening a business down here, but then I reconsider. Is the all-consuming responsibility of it worth the trade offs? I love my new job here at the local resort. I make a decent wage, and have plenty of time to myself. I find that I occasionally chaff at the rules (I'm not allowed to wear my nose ring, I have to wear a uniform, and they want me working Fridays and Saturdays until 4pm), but then I remind myself of the life I am living, and I know I can always quit, if it gets to be too much.

Life is good. If you're looking for me, I may have disappeared into the fairy realm!