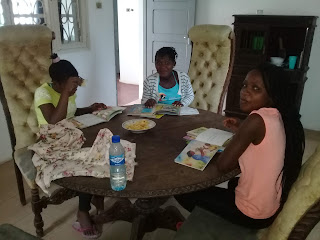 One of the most difficult challenges for me in the Peace Corps is learning to live with discomfort and do it anyway. Every day, I am faced with the urge to just hide out in my house and avoid people. At least in my home, I don't have to worry about not being able to communicate, or risking people staring or laughing at me.

I have worked myself into low-level anxiety over taking a chapa to town. I have mentally stubbornly refused to stand up in front of people for a palestra (health demonstration). I have mentally rebelled 100 times from a task, simply because I know it is new for me, and I will be stretching my abilities to try it.

The thing is...it always works out. It is never as bad as I feared, and I feel a great sense of accomplishment afterward.

Case in point, yesterday, I was sitting in my room and sewing. I was trying to figure out what I was going to do for the day, and wondering when and how I would meet children and start a youth group. I have been very concerned about this. 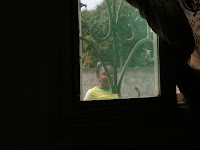 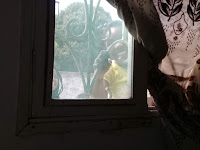 As I am sitting there, I realize I am being watched through my window. I look up, and there are 3 girls about 14 years old trying to peer into my room. They were speaking to me in broken Portuguese and Changana, and I was trying to figure out what they wanted. Finally, I motioned for them to come in. I brought them into my living room, and for the next couple of hours, they read the Portuguese children's books I had, while I continued my sewing. 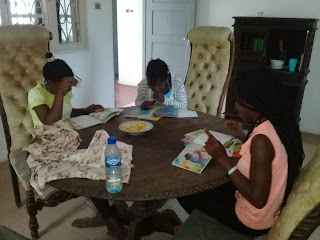 After a while, they expressed interest in some of my English books. I went and found two Yoga books I had, and they read English aloud, while I helped with their pronunciation. Eventually, they decided to try the various poses in the Yoga books, and they dissolved into giggles when they discovered I could do the splits.

Like every day in Mozambique, there is rarely an agenda. Things just unfold as they are meant to, and it always works out. Without even trying to, I was able to accomplish several of the Peace Corps objectives, simply by inviting some curious girls into my home. I'll call that a win.


Unexpected Success https://www.countdowntofreedom.net/2019/08/unexpected-success.html #PeaceCorps service is about using every opportunity to help others, even when you least expect to do so! This morning, I was just sitting in my room sewing some clothes, when these young ladies started peeking through my window. I invited them in, and we started reading books in Portuguese. After awhile, they wanted to read English, so I pulled out some #yoga books I had. This prompted them to try the poses. I had to try, with my broken language skills to describe yoga. I told them it was about remaining calm and reducing stress. They said, "calma, não estresse." That works! #peacecorpsmozambique #PeaceCorpsVolunteer #peacecorpsafrica #Mozambique
A post shared by Kandace Blevin (@kandaceblevin) on Aug 18, 2019 at 6:46pm PDT