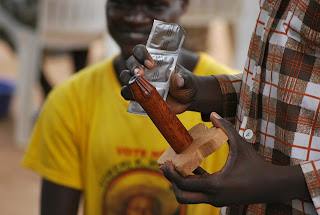 I recently tested for HIV. I am pleased and unsurprised to say that I am sero-negative.

The thing is, even though I had known that I was negative, there is always an underlying fear. I see it in the faces of the young people that come to the SAAJ clinic to be tested and receive contraception. It is a level of fear and anxiety and then palpable relief when they receive the good news of a sero-negative status.

Sadly, I have also seen the shock and devastation of a positive result.

Later in the day after I had been tested, I was speaking with my friend in the States. I told him of my HIV negative status, and we both chuckled as if there could be no other answer, but the awkwardness was there.

I am a 45-year-old woman. I have been married twice and had numerous relationships over the years. I have not always practiced safe sex. As I was chatting with my lover, we chuckled awkwardly because we know that we were careless with each other, and we have been careless with other relationships, too. I think about the times I have been with someone and I have taken their word that they are safe. I know it's wrong and taking a chance, but I play the odds. So far, it has worked out for me.

As an American woman, speaking with my lover, I also know that we would expect to have unprotected sex when we see each other again, even though there have been many months since we were last together. I know how weird it is to have this conversation with him, and I can only imagine how damned difficult it is for a 14 or 15-year-old Mozambican facing sexual decisions with limited experience and knowledge.

The problem is, I cannot un-know and unsee what I have experienced here. How can I expect a young person to not only know their status but disclose it to future sexual partners? If I were just beginning to date someone and they disclosed that they had something as innocuous as herpes, I would have second thoughts. Disclosing and accepting a partner with an HIV positive status is more than many people can take.

All of this was going through my mind as I was chatting with a Mozambican gentleman this weekend. He was telling me the story of his deceased wife. While he was working in another country, she became very ill. He kept urging her to go to the hospital, but she refused. He felt scared and powerless. He was trying to get back to her. He even had their neighbor checking in on her.

I knew, with a sinking feeling, where this story was heading even before I heard it all.

Finally, she asked him to make sure he took care of their children, and she ended her life. The doctors told him that she had been HIV positive, though she never disclosed it to him. She had been taking her medication to keep her viral load low and it prevented her from transmitting the virus to him or to their children. Somewhere along the way, though, she stopped treatment.

When that happens, the virus rebounds in your system, and you can get very ill very quickly. Rather than disclose her status, she chose to die.

In America, we tend to ignore things like HIV and STDS. We pretend that health clinics are only about contraception. In Mozambique, young people can go to the clinic at any point and receive HIV testing, Syphilis testing, and any kind of contraception available. The youth are educated about safe sex, family planning, staying in school, domestic violence, and basic hygiene. There is no concern for money and they can come on their own. They are supported by wonderful organizations throughout the world who are dedicated to eradicating HIV/AIDS.

Please, know your status, know your partner's status, practice safe sex always, and if you are positive, know that there are treatments available to keep you alive and prevent transmission to your partner or the unborn child. Educate yourself and others about living with HIV.

Resources:
US National Library of Medicine, National Institutes of Health
Scientific Production about the Adherence to Antiretroviral Therapy
https://www.ncbi.nlm.nih.gov/pmc/articles/PMC5624308/