I almost ran away today... 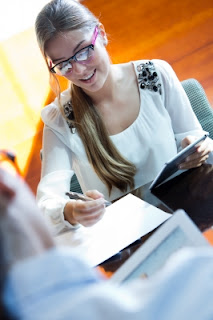 I love being a business owner. Once upon a time, I was working for a good company. I had benefits, health insurance, even a retirement plan. What I didn't have was freedom to determine my own path. I couldn't implement the many changes that I saw needed to be changed. I could work (or not work) and my hours and pay would stay the same. Once a year, I would have an annual review where I could possibly get anywhere from a 1-3% increase. All that changed when my boss, who was actually a wonderful mentor, told me the only way to break out into the next level of my stagnant career was to go into sales.

I wonder if you can understand just how scary that was for me. I had two young kids at home, bills to pay and never enough money. The fear of giving up a "steady paycheck" for commission was terrifying. What if I couldn't make it? What if no one bought from me? How would I cover my bills? Could I go back if it didn't work? I agonized over it, but I finally decided that I had to do it.

I tell this story, not because of what happened next (I made more money, I stayed in sales for years, bought a house, traveled), but because of how my life was determined based on that one small decision. My parents were both Civil Servants for the government. They both have had very responsible jobs that, at times, required top secret clearance. They both had responsible and relatively safe jobs. Mom had always told me to get a job with benefits and weekends off for the kids. I was told to seek safety and stability. To go into sales was a frightening unknown.

I have come to realize that fear paralyzes. I would argue that fear is one of the greatest causes of evil in the world. People are afraid to make a move, get married, get divorced, have kids, don't have kids, leave a job, accept a job. I see clients every day that hate their jobs. They stay because they need the money, because they have seniority and a retirement package. They also have deteriorating health, anxiety, depression, fibromyalgia, and stressed out family lives.

During this recession, I have seen many people displaced and struggling with their identity after being laid off after years with a company. I have come to realize that there is no "safe" job. People have been downsized, right-sized, off-shored, rehired as temps, forced to take pay-cuts and part-time work. People fear "outsiders" that may take their jobs / benefits / get something that was supposed to go to them. Fear causes hatred, pain and evil.

Earlier this year, I expanded my business into a much larger space. I knew it was straining the boundaries of my credit and financial capability, but I decided to go for it. I admit, I have had a few stumbles along the road. I spend long hours at the office, work until I am aching, stress over staffing issues and how in the hell I'm going to make the bills. The thing is, though, I always do. It may not be on the schedule of my bill collector, but it happens. I'm still here, and I'm still plugging along. My fear now is about timing. When the wolf is at the door, and it seems dark out, do I run, or do I stay the course? I have struggled with this for a few months now.

I've discovered that if I just ask questions, ask for advice, and keep my ears open, opportunities will present themselves. I was ready to pack it up today. I really wanted to run. I sought advice, and it was not what I had hoped for, but it showed me that running was not an option. Amazingly, right after that, I received some positive news.

So, making the decision to go into sales almost two decades ago, set me on the path of now owning my own business. It has meant a whole new level of freedom and control of my destiny. It has brought me to a new level of economic independence. It has also come with a new set of fears. Running my own business is the best thing I've ever done in my life. It is also the scariest. Every day I have to face down my fear and keep making those scary decisions. To think, it all started all those years ago with one small decision.